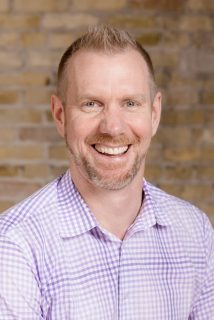 Steffen has had a heart for Lake Park since the day he and Liz attended their first service here back in 2007.

The Caves were married here and Pastor David baptized both their children, so even during a 5-year stint in Colorado, it remained “home”.

British by birth, Steffen has lived in the US for 16 years, having spent several years in the Middle East, Southern Africa and Europe.

He came to the US in 2001, initially serving as a Product Manager for military jets and helicopters. After a bit of a “crisis of conscience”, he made the switch into Healthcare, where he most recently managed the product launch of a new peritoneal dialysis machine. Over the past couple years, Steffen has enjoyed transitioning out of Corporate America to focus on things that really matter- namely, being able to spend more quality time with Lake Park family and pursue other life goals, including being a Voice Artist and attempting to master Tae Kwon Do!