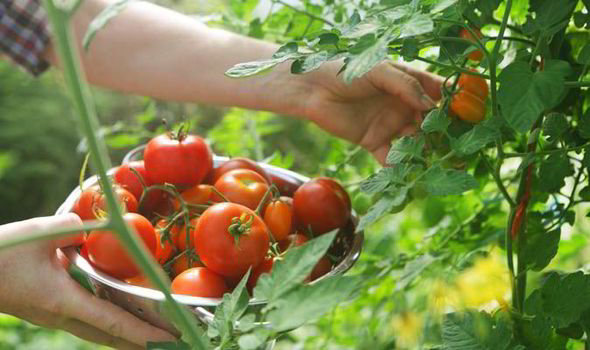 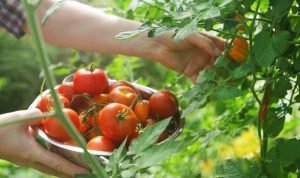 As a child, I only knew of two varieties of tomatoes—the kind that came from our garden, and the kind that masqueraded as tomatoes in the grocery store. The former were to be eaten freshly picked from the garden and cut into thick, juicy slices best enjoyed without adornment on a warm late summer evening. The latter I learned to avoid at an early age (and still do). There was something magical about the way my dad took an otherwise unremarkable patch of our unremarkable suburban St. Louis backyard each year and quietly coaxed huge beefsteak tomatoes, luscious cherry tomatoes, bright green bell peppers and pearly white onions from its depths. He never taught me his techniques, or perhaps more accurately I was not the most interested student at the time (though I do remember the details of his fairly frequent battles with moles who also loved the garden). I am fairly certain the garden was not organic, nor filled with heirloom varieties of vegetables nor a wonder of crop rotation and sustainable land management. We never talked much about the specifics of how to grow a garden and certainly never the spirituality to be found in a garden, but clearly this ritual of preparation, planting, nurturing, harvesting and nourishing one’s self and family with the fruits of the interplay of land and labor was important to my dad and meaningful to him in a way neither of us articulated, but clearly felt.

As an adult, that early unspoken yet deeply felt lesson in loving the land and learning how to treat it with care to allow small miracles to grow and flourish from the soil is still with me. The sense of wonder that comes with coaxing seed to plant, with appreciating the way in which nature is able to flourish even in the least hospitable of conditions, returns to me every time I plan a garden in the cold of winter, tuck a new crop of herbs into a freshly turned bed in the spring or convince myself that this is the year I will finally find success with growing flowers from seed for lush summer bouquets. And though I am now an organic, composting, rainwater collecting, heirloom variety seeking vegetable, herb and flower gardener married to an equally passionate gardener (and farmer-in-disguise), I still think of my dad and his tomatoes when I garden. I now believe that what he found in the garden and gifted to me wasn’t really dozens of delicious tomatoes over the years—it was grace. It was an appreciation of the beauty to be found in nature, of the acceptance and peace nature can bring if treated with respect and care. 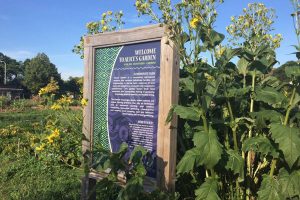 The grace of nature is present for all who seek it, whether in your backyard, at a local park or while exploring one of our grand National Parks. As a member of Lake Park Lutheran Church, I have been privileged to find a particularly meaningful connection with the grace of nature in my work at Alice’s Garden. A community garden located in the heart of the inner city of Milwaukee, Alice’s Garden serves as space of beauty and grace for all who enter, a reclaiming of a space once left barren after homes were razed, community bonds broken and the land scarred to make space for a freeway that was never built. Gradually, thanks to the voices of community leaders such as Alice Meade-Taylor and others who spoke out about the importance of recognizing and respecting the connection of land to the people who live on it, the garden was born and stands today as a testament to the power of community and belief that, as in nature, miracles can arise in the most inhospitable of circumstances.

In 2010, Lake Park sponsored the creation of an herbal labyrinth in the garden, which has grown (and often over-grown, thus my frequent requests for weeding help!) into a lush space for meditation, for simple enjoyment, for planting, for pruning and for experiencing the grace of nature. We have, along with many others in the Milwaukee community, continued to help maintain the labyrinth over the years. On a beautiful Saturday morning in September, I was once again privileged to work alongside 18 of my fellow Lake Park members in the labyrinth, wondering at the amazing connections made with and within nature as we kicked off our “Seven Saturdays of Service” in honor of the 500th anniversary of the Reformation. We dug, pulled, trimmed, bagged and sweated in the sun, together both receiving the grace of nature and using the gift of our ability to help nurture that space of grace for others—Augustine’s idea of “common grace.” Which is what my dad and his tomatoes, and now Alice’s Garden and the people in it, have helped me see so clearly.

All are welcome in the garden, always. And if we’re lucky, maybe a gardener will treat us to one of those ripe, red, delicious, grace-filled tomatoes.