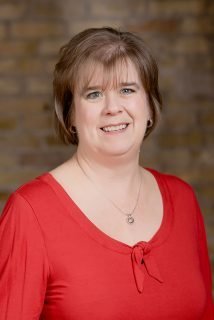 Laurie has always been surrounded by music. Her grandmother was a church organist for many years. At family reunions, her family sang “Be Present at Our Table Lord” in four-part harmony, without accompaniment.

After studying piano with her grandmother for many years, Laurie had the opportunity to learn to play the organ in high school and found her calling in church music. She continued to study the organ at Concordia College in Moorhead, MN and played at her home congregation, Paynesville Lutheran as well as for Hope Lutheran Church.
After moving to Milwaukee and finding Lake Park, Laurie joined the choir. She started directing the Lake Park Choir in September 2001 and transitioned into the role of Organist in September 2012. She is working on breaking out from her four-part, by the book Norwegian heritage by playing with Chris and Pastor David.

Away from church, she enjoys spending time with her daughter, Maggie (born 2003). She also enjoys reading and juggling in her free time.